Lending trends have led to more conservative underwriting in recent years follow the period of too often lax lending standards during the boom years in the early 2000s. One indicator of this change is the role played by the borrower’s credit score.  A recent paper by Colton and Carliner (2014) use Freddie Mac single family mortgage data to highlight this trend.[1] They show that the share of these loans with FICO scores below 700 was consistently at or near 35 percent in 2004-2007. The share of loans within this range was below 7 percent in 2012. The average FICO score went from 722 to 765 during the same time period. Clearly, lenders tightened up underwriting criteria in the years following the housing boom of the mid-2000s.

Now there is considerable and ongoing discussion about whether it may be time to loosen underwriting standards and, in so doing, help stimulate a recovery of the market for single family and allow more people to become owner-occupants. One way of doing this is to extend downward the range of FICO scores borrowers need to qualify for a home mortgage. Of course, doing so will increase the credit risk of residential lending, all else equal, because there is strong evidence that borrowers with lower credit scores are more likely to default than higher FICO borrowers, all else equal.

A key question in this debate is how much? That is, how much additional credit risk will lenders assume when they begin to make loans with lower credit scores and by how much with mortgage interest rates have to increase in order to incorporate the increased credit risk? Collateral Analytics has developed a tool to help address this question. Our new Credit Risk model produces estimates of the credit risk embodied in mortgages with different credit scores, different initial loan to value ratios, and a range of other traits that affect credit risk. A summary output measure of the model is the credit risk spread (CRS), which measures the annualized amount of credit risk embedded in a particular mortgage.

The purpose of this article is to use the CA Credit Risk Model to shed light on the impact of lowering credit scores on credit risk and mortgage interest rates. The model was applied to 20 stylized properties with three different initial Loan to Value ratios (80, 90, and 95 percent) and three different initial credit scores (660, 740, and 800) in 20 large CBSAs. ARMs versus FRMs are distinguished. By examining differences in the credit risk spread for mortgages of different LTVs and credit scores the impact of changing lending standards can be inferred.

The results of our examination of this issue are summarized in Table 1. The average CR spreads among the 20 CBSA for these mortgages are contained in the first three rows. For example, the estimated average CRS for an FRM with an initial LTV of 80 and an initial credit score of 660 is 84 basis points. As expected, loans with higher LTVs and the lowest credit scores have the highest credit risk spreads. FRMs are riskier than ARMs for the lowest credit scores, but the differences between ARMs and FRMs in the two higher credit score buckets are modest.

The next three rows directly address the questions posed in this article.  For example, reducing the credit score from 740 to 660 increases the CRS and the interest rate that lenders would expect to charge by 37 basis points for an 80 LTV FRM and 68 bps for a 95 LTV loan. The comparable numbers for an ARM are 25 and 47 bps.

A key trait of the CA Credit Risk Model is its ability to offer estimates of the Credit Risk Spread that vary by local housing market, which we typically define as the CBSA. As discussed more fully in the most recent article on the CA web site about the CRM, Key Drivers of Variations in the Credit Risk Spread among Markets, such variation is to be expected because of differences among markets in the future paths of house prices, different foreclosure laws, and, especially, different sensitivities by borrowers to changes in the conditions that affect the decision to default. While measuring these differences is a challenging assignment, our results seem both reasonable and can be tied to the key underlying factors.

Figure 1 highlights this point regarding the sensitivity of the CRS to a lower credit score to local market conditions. This plots the increase in the CRS for a decrease in the credit score from 740 to 660 for a prime loan with an initial LTV of 90. One obvious inference from these results is wide variation around the average noted above. For example, the increase for the Cleveland CBSA for an FRM is 127 basis points whereas it is only 20 for Phoenix. The largest increases for an ARM are estimated to be about 60 bps in Cleveland, Denver, San Diego, and San Francisco. The smallest increases for ARMs are estimated for the Dallas and Washington DC CBSAs.

Evidence exists that some lenders have already begun to lower credit scores for its mortgage lending. For example, Bloomberg recently reported on this trend and reported that Wells Fargo has lowered its minimum credit score for GSE approved mortgages from 660 to 620.[2] We believe that our Credit Risk Model can be of help in establishing what are called “Rate Sheets” to define mortgage rates for different FICO and LTV scores. At a minimum, our model and its output can offer an external check on internal calculations. Its value will be particularly great to those institutions willing to consider varying their rate sheets and mortgage interest terms among local housing markets. 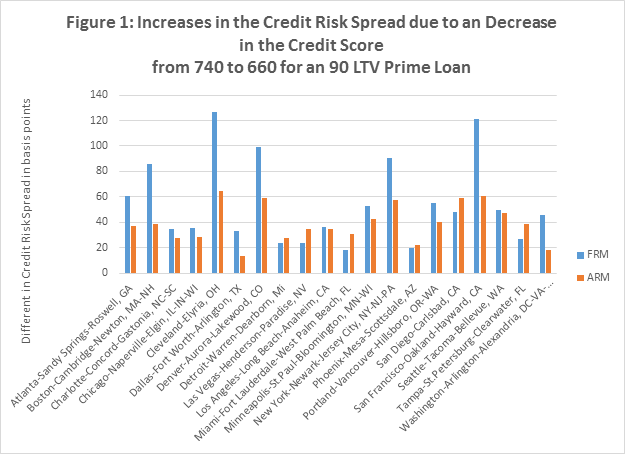 [1]“The Impact of Housing Finance Reform on Mortgage Rates, Home Buyers, and the Economy” by Kent Colton and Michael Carliner, February 14, 2014. See Exhibit 2 of their paper, which is accessible via this link: http://online.wsj.com/public/resources/documents/Leading-Builders-of-America.pdf.