Don’t panic, but U.S. home prices are about 4% overvalued.
Why Miami could crash again.

Intent on buying an elegant arts and Crafts home in Berkeley, Calif.? How about a bachelor pad in playground Las Vegas? Think again. Such markets show signs of overheating.

According to Michael Sklarz, chief executive at Hawaii-based real estate valuation firm Collateral Analytics, U.S. home prices are currently 4% overvalued. That’s not too bad by historical standards, but it’s still on the wrong side of the curve. Collateral Analytics figures that the overall U.S. housing market was on average 1% undervalued over the past 30 years.

Sklarz’ firm, which provides data to mortgage-lending officers across the nation, comes to its conclusion using a “predictive indicator,” a measure that takes the median price of single-family homes sold in each metro area and divides that price by the region’s “intrinsic value”—an optimal affordable home price Sklarz calculates based on median incomes and other local economic factors.

Similar to a stock’s price/earnings ratio, it also indicates what buyers should be paying for a home in that area. If euphoria drives prices higher than what most local households can afford to pay, the median home price will rise above the intrinsic-value price, signifying the market is overvalued.

We asked Collateral Analytics to use its metric to pore over 935 metro areas across the nation and identify which markets are showing signs of overheating. The firm figures there are 733 metro areas nationwide in that category. We’ve listed the top 10 overheated markets in the table below. They generally tend to be the most volatile in the country and quick to overheat, and they fall the hardest when things get tough, but as a rule, the wealthiest enclaves of such communities are more stable.

Exuberance is cropping up most in the larger metropolitan areas of Sacramento, Calif. (15% overvalued); Atlanta (13%); Berkeley, Calif. (13%); and Las Vegas (12%). Six of our top 10 overpriced markets are in California, where overvalued housing is a byproduct of a steroid-pumped tech industry. San Antonio, the start-up and venture-capital hangout of the Lone Star State, makes our list for the same reason. 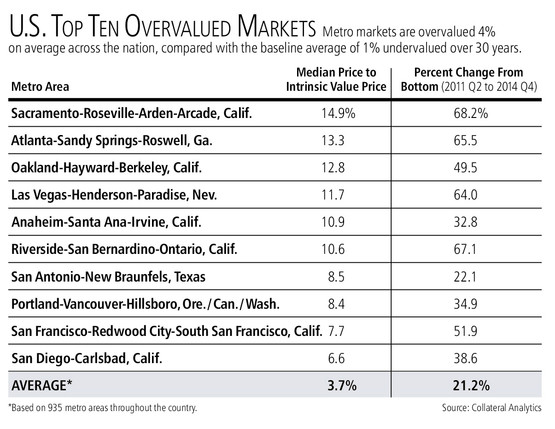 Don’t panic. During the boom of 2006, housing nationwide was overpriced by 15%, so the current 4% is still relatively benign. And when a market overheats, there’s usually a natural adjustment: Housing prices flatline until median incomes catch up. Sklarz says that the dramatic corrections happen when a market is overvalued by 50% or over. In the last blowout, for example, Miami and Los Angeles hit prices 71% and 54% above their “affordable” level, respectively, which puts Sacramento’s current 15% in perspective.

OF MORE CONCERN is that the picture Collateral Analytics provides isn’t particularly sharp when it comes to big cities, because the firm’s analysis is built on single- family home sales only—no condo data—while the broad metro catchment areas are defined by the U.S. Office of Management and Budget. The New York City catchment includes, for example, Jersey City, N.J., and White Plains, N.Y.; housing data from those bedroom communities seems almost irrelevant if you are looking to buy a three-bedroom condo in red-hot Manhattan.

So while Collateral Analytics’ list is useful as a general guide, buyers in big cities need to go the extra mile, gathering data and analyzing local market forces. Consider metro Miami, for example, which shows up as 1.2% undervalued, according to Collateral Analytics.

Miami developers are currently raising 333 new towers, versus the 246 built in 2008. “We’re about four years into the seven-year cycle,” says Peter Zalewski of Miami-based CraneSpotters.com, who figures if you add in the 25% price difference between resale values and brand-new construction, the prices for newly constructed condos could drop by 15% or more when the excessive supply hits the market around 2018 or 2019.

The bust might even come sooner than expected. It’s no secret that wealthy Chinese, Russians, and South Americans have been snapping up properties in Miami, where foreigners now account for 50% of homes sold above $1 million, according to Christie’s International Real Estate. But the dollar has risen 23% this past year to end of March, against major currencies.

Such currency moves massively increase the price of Miami homes for foreign buyers, drying up overseas demand. New York City attorney Marlen Kruzhkov suddenly received inquiries from Russian buyers looking to flip Miami apartments worth $5 million to $12 million. For a Russian, the ruble’s 65% collapse through end of March effectively turned into a margin call on their valuable U.S. properties.

In short, metrics like Collateral Analytics’ are valuable, but nothing replaces gumshoe reporting and local understanding when deciding whether to put down that deposit.