CA’s Credit Risk Model generates estimates of credit risk spreads on residential mortgage loans. These spreads measure the annualized cost of a potential default on the mortgage. The model is to offer measurements of these credit risk spreads for a variety of mortgage traits such as initial loan to value ratio and the borrower credit score.  A critical goal of the model is to highlight variations in these credit risk spreads among metropolitan areas. The main driver of these variations is a metropolitan area specific set of future house price scenarios, which include a baseline forecast and a severe stress scenario.

This report is divided into five sections. The first summarizes the new HP scenarios. The second presents the new CRSs for 29 large metro areas. The third compares the results of the CR Model with the new HP scenarios to those with the previous HP scenarios. The fourth section tackles the difficult issue of identifying the role that the changes in the HP scenarios have on the CRS relative to a number of other factors that affect the CR Spreads. The final section discusses some of the other traits of local housing markets that can affect the CR spreads and our ongoing commitment to review and use the model to learn more about these variations.

New Credit Risk Spread Estimates for a Standard Mortgage
The Credit Risk Model produces four different estimates of the credit risk spread. Attention is first focused upon the credit risk spreads (CRS 2) for a standard, prime, conventional mortgage loan with an initial LTV of 80 percent and a borrower credit score of 700 obtained by the owner-occupant for the purchase of the property. Estimates of the latest CRS 2 are presented in Table 1 for 29 large metropolitan areas based upon the latest version of the CR Model and distinguished by whether the loan was a fixed or adjustable rate mortgage (FRM vs ARM).

The average CRS with the new model for FRMs is 28 basis points versus 38 basis points for an ARM.  There is a wide range of values around these averages. The four largest FRM CRSs are found in Cleveland, Denver, Dutchess-Putnam, and San Francisco with CRS 2 spreads all in excess of 45 basis points (bps). The 5 largest ARM CRSs exceed 50 bps and include Cleveland, Dutchess-Putnam and three others: Atlanta, Lake-Kenosha, and Tampa Bay. Five of the six metro areas with the lowest CRS 2 spreads for FRMs are from the SAND states. The metropolitan areas with the lowest ARM CRS 2 spreads are from the SAND state of California– Anaheim, Los Angeles, Oakland, San Diego, and San Rafael.

Changes in CRS with Newly Deployed HP Scenarios
The differences between the new CRS 2 estimates and those from the previous HP scenarios are contained in Table 2.  These are ranked by the size of the changes in the FRM CRS 2 estimates from the largest declines to the largest increases. The average decline for the FRMs is 9 basis points. The average CRS 2 for ARMs increase on average by 7 basis points. Since the changes in the HP scenarios for each metro area are the same for both ARMs and FRMs the difference highlights an important aspect of the CA CR Model – the sensitivities to house price scenarios differs between FRMs and ARMs.

The wide range of the changes in CRS 2 around the average values indicates that these sensitivities also differ widely among metro areas. Consider two with the largest declines in CRS 2 for FRMs — San Francisco and San Rafael. CRS 2 declines by -52 bps for FRMs but only -12 bps decline for ARMs. Similarly, the declines are -30 and -2 for San Rafael. At the other end of the spectrum are Dallas, Lake County, WI, and Atlanta. There is little change in CRS 2 for FRMs but substantial increases for the ARMs.

For the other metro areas, there is wide variation in the changes in the house price scenarios and the changes in the CRS 2 estimates. CRS 2 declined for both ARMs and FRMs in only 10 of the 29 metro areas. It increased for both ARMs and FRMs in just 4 metro areas. In the other 15 metro areas one increased and the other decreased. Such variation makes it difficult to identify a single reason for the changes, but it does underscore our attempt to incorporate geographical granularity into the CR Model. Doing so leads to much wider variations in measures of local market credit risk than are captured in models that aggregate at national or even state levels.
Sorting out the Differences Impact of New HP Scenarios
The CA Credit Risk Model includes a number of features to help identify the complex impact of house price scenarios on credit risk.  In particular, CRS 1, CRS 3, and CRS 4 are constructed as follows:

On average, holding the metro area house price scenarios constant reduces the CR spread for this loan type by 10 bps for FRMs from 42 to 32 bps (CRS 1 – CRS 3). Just the opposite happens for ARMs, where the gap between CRS 1 and CRS 3 increases by 11 bps (63 to 74). Clearly the local market variations in the default/prepayment equations are driving this difference. There is also wide variation in these differences among metro areas. The gap is negative for 7 metro areas for FRMs and for 20 metro areas for ARMs. So the common default/prepayment equations are generally less sensitive to the same price scenarios than the metro specific equations for the ARMs and just the opposite for the FRMs.

The use of CRS 3 also provides an alternative and more plausible estimate for some of the outliers. Consider the case of the Dutchess-Putnam metro area. CRS 1 is 230 basis points for a 90 percent LTV loan with a borrower credit score of 660.  CRS 3 for the same loan is only 122 basis points. This indicates that the default/prepayment equations for Dutchess-Putnam are substantially different than the common set of equations underlying CRS 3 since both CRS 1 and CRS 3 use the same house price scenarios.  As such, CRS 3 may serve as a more reasonable estimate for this metro area.

A comparison of the differences between CRS 3 and CRS 4 highlight the role of changes in the HP scenarios holding the default/prepayment equations constant. On average, the baseline HP scenarios increased by 5 percent relative to the common scenario and the stress scenario increased by 5 percent. These have offsetting impacts; a higher baseline reduces the credit spreads and a more severe stress scenario increases them.  The results suggest that the more severe stress scenario is dominant because the CRS 4 is higher than CRS 3 for all of the metro areas and for both FRMs and ARMs except one. The exception in Miami, where the changes were essentially zero.  On average, the CRS for the FRMs increased by 6 bps (32 to 38) and by 14 bps for ARMs (74 to 88).

Ongoing Examination of Other Drivers of the CR Spreads
The focus of this report has been on the impact of the new HP scenarios on the credit risk spreads. In fact, the CA Credit Risk Model is a highly complex model driven by a number of other traits of the local economy. These include the county level employment forecasts and the REO discount, which is estimated at the county level. Another variable that impacts the CR spreads is the probability of a negative AVM gap. All else equal, the larger the probability that the AVM is below the appraised value underlying the loan, the larger the credit risk spread. A recent article, Measuring the Impact of an Upwardly Biased Appraisal on Credit Risk, highlights the powerful impact of this variable. In fact, there is wide variation in this variable among the specific set of properties used for this analysis. Future work will focus on a larger sample of properties and a wide variety of values for this variable. This will provide an additional opportunity to explore and decompose the variations in the CR spreads among markets.

Obviously, a complex model such as ours is subject to criticism because of various types of measurement error and the many judgments underlying the results. We surely agree and will continue to make improvements and do ongoing sensitivity analysis. This is one reason we provide four different estimates of the credit risk spread for each market. Perhaps in areas where the differences are substantial more investigation may identify quirks in the coefficient estimates that may have substantial and misleading impacts. We continue to do such investigation. We expect to update the HP scenarios on a quarterly basis. We can also incorporate client house price scenarios that supersede the ones used in this report. As such, the existing CR Model may be viewed as an additional tool by those seeking to know more about local market credit risk. Like our various AVM tools that permit, for example, different definitions of neighborhoods and allow for different kinds of filters of regular versus distressed sales, clients can use the CA Credit Risk Model to explore alternative assumptions. We welcome such experiments and remain confident that such experiments will help us learn more about the local market conditions that drive credit risk and serve to debunk the myth that credit risk on mortgages is the same for all markets! 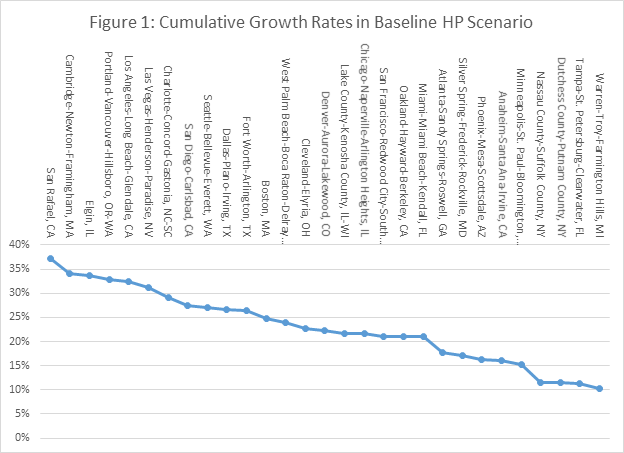 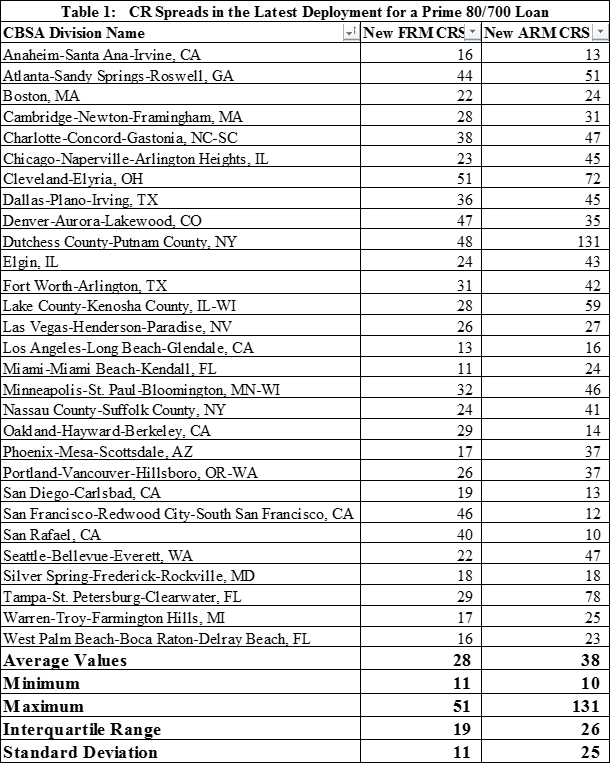 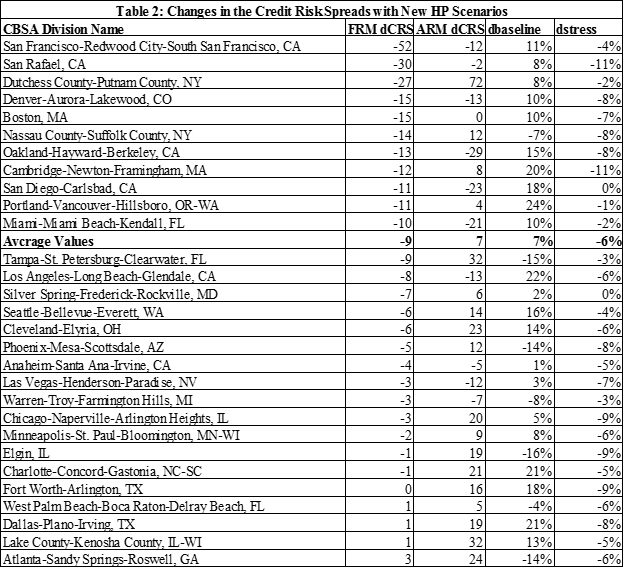 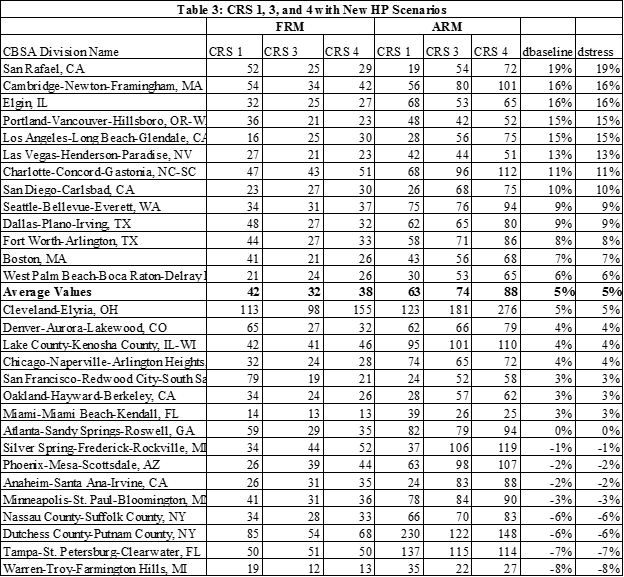